“The woman behind the man” is not just a saying — it’s a fact when it comes to power couple Leslie and Jerome Karam.
Jerome had left home with $50 in his pocket and big dreams. After graduating from Louisiana State University, he moved to Dallas and lived with his brother while reaching out to real estate companies for a job.
Leslie was a student at Southern Methodist University at the time. Sadly, she had to return to El Paso to be with her mother, who was battling cancer. When her mother died, Leslie returned to school for her final semester. 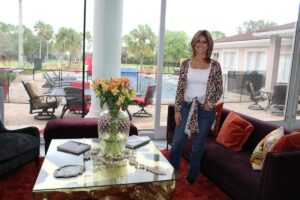 When she returned again to El Paso, she found work at a travel agency. Jerome set his sites on working for the No. 1 real estate company in the Dallas area. The agency’s owner, Carolyn Shamis, refused to meet with him at first. After numerous phone calls, she relented and told the ambitious 23-year-old, “I’ll give you exactly two minutes to tell me what’s on your mind.”
He wowed her during those two minutes, and she took him under her wing.
At the time, country singer Conway Twitty’s home was for sale, and it was listed by Shamis’ company. Shamis asked Jerome if he could live there until the property sold, and he gratefully accepted. His days of sleeping on his brother’s couch were over.

Leslie and Jerome met in 1986 at a Southern Federation of Syrian Lebanese American Clubs event. They dated for 10 months and got married in 1988. It was Leslie who suggested that Jerome become a lawyer. While he attended the Thurgood Marshall School of Law at Texas Southern University, Leslie was getting her masters at University of Houston. She fondly remembers their first apartment, a one-bedroom that cost $300 a month.
Money was tight for the newlyweds. One of Leslie’s cherished memories is of her and Jerome’s daily meetings halfway between the University of Houston and Texas Southern for lunch at a Blimpie restaurant. There they would share a 6-inch Blimpie sandwich.

They did this every day until their Blimpie card was stamped showing 10 purchases, and they could then get a whole 12-inch sandwich to share.

Memories such as that have kept them grounded and humble. Their loving union has produced ve children and two grandchildren and has lasted 32 years.
To what does Leslie attribute their success? It’s their deep Catholic faith, she says, and always putting family first. Leslie and

Jerome’s company, JMK5 Holdings, includes The Falstaff Brewery complex, which includes a cruise ship terminal parking garage; a boutique hotel, the trademark collection by Wyndham; The Karam Lofts; and a plush rooftop event venue called Events @ The Tasting Room.
This civic-minded couple gives back to the Island they love so dearly.

Texas City’s west-side substation a good deal for all